This project proposed a novel approach for path planning with landmarks. Use of landmarks in way finding is considered as old as human civilization and landmarks, if incorporated properly can enhance support provided 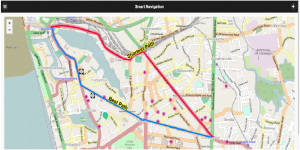 Optimum Path based on landmarks Vs Shortest path

by navigation support systems. The landmarks are having high social and cultural sensitivity and therefore considering the local perspective is important. This study proposes a landmark based navigation approach based on OSM data model. As the attributes already available for landmarks are not sufficient to provide a weighted model, more tags and attributes are introduced to the OSM data model to capture more detailed information of landmarks. This landmark model is supposed to address local context as well as context awareness of landmarks. The landmark information is used to derive a path planning model which incorporates distance as well as significance of the landmarks along the path to find the optimum path.To reduce the clutter of icons and details on small mobile screens, a linear map is used to show the proposed path.As the collecting of landmarks by a single organization is impractical VGI approach is proposed.

To keep the user’s interest a geo-social application is incorporated where the users can interact with their friends within a proximity radius of their own choosing. The basic socializing functions

Search friends based on proximity

are also provided to the user through this geo-social application. Accordingly, this project is developed with four main modules which deals with landmark storing model, landmark based path planning model, geo-socializing aspect and linear map generation. The project will be continued in 2016 also  for user evaluations and refinements.

GeoGeek is a quiz-based e-learning web application supporting learning of History and Geography of Sri Lanka. The application is developed as an interactive quiz-based game, which will assess the knowledge of a user in the G.C.E (O/L) level history and geography subjects. It creates a new mechanism of exploring historical information, by combining it with interactive web maps, visual aids such as graphics and videos etc. Questions are created by synthesizing motivational theories and rewarding mechanism to encourage the user to engage in learning subjects considered traditionally to be boring, dull and unexciting. Three main categories, namely, Multiple Choice questions, True/False questions and GIS-based map marking questions are sued in the quizzes. Map marking questions involved point, line and polygon based logic.The application is developed using Mapserver , openlayers, postgreSQL , PHP and other FOSS technologies.

This project is initiated by two Nigerian students studying at SLIIT. The decision to implement a system that effectively monitors leakages in oil pipes across the Niger-Delta was inspired by the sufferings and outcry of the

people living within this region. They have long suffered the adverse effect of these spillages and responsible parties have failed to make proper reparations for these damages. With this system, we aim to putting these data using crowd sourcing approach for the responsible parties to see and make repairs or make some kind of compensatory payments. The system will be implemented as an Android application and web interface and works with postgrSQL to store the reporting of oil spillages. Leakage points are displayed on a map with details. Once the system is ready, at the second stage, it needs to be making available for the public in Nigeria.